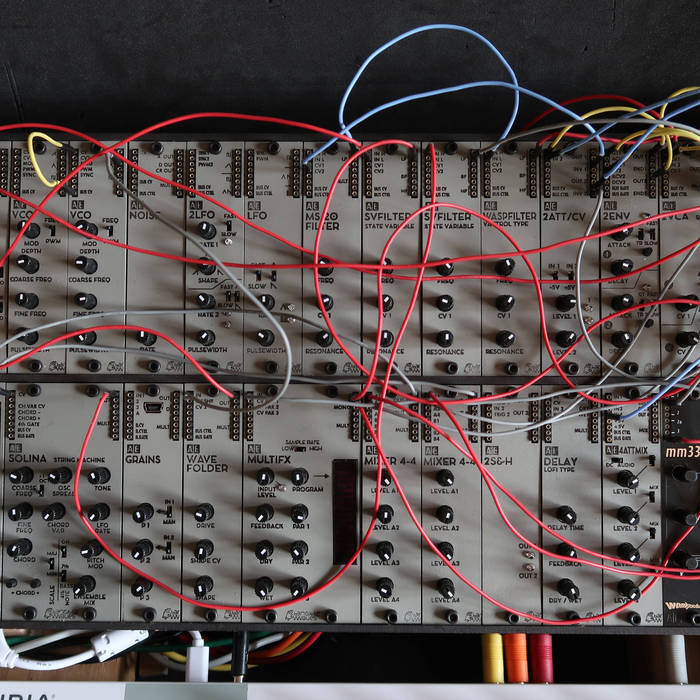 See a video of how this patch works here: youtu.be/Zwxy_qU6xzM

How it was built:

Solina ran to an SV Filter and a self oscillating MS20 (turned 808 kick and ran through a Wasp) are the driving elements of this patch.
The two together set a pace for the song. With the help of my wife, I've named the track "stride", as that's the feeling it seemed to convey to us both. Added to those two elements is a triangle VCO which runs through the wave folder, and from there into an SV Filter. This is used for the higher "tune" that flows through the song.

The Solina and the VCO are mixed together in the mm33, and sent to the MULTIFX where I was using Dual Delay to sort of fatten the sounds up and make them a little more interesting. The kick is not ran through any effects because I wanted it to remain really crisp and distinct.

Both the left and right channels from the MULTIFX were sent to my VCA where I used my sidechaining technique to duck their volume a bit just as the kick hits. This is a technique widely used in electronic music and can give some really satisfying results. It's pretty amazing how something so simple can really change the entire feel of a song.

How it was played:

The patch is controlled with a BeatStep Pro midi controller.
While the BSP was keeping things moving, I was adjusting the SV filters and the MM33 by hand to change the timbre of the main sounds (and hopefully keeping things interesting that way).

This track was probably done in 10+ takes, and took on at least 3 distinct sounds before I got something I really liked. Everything you hear was done in a single take, only with some light EQing after the fact in GarageBand.

For me, it's really important to work on a patch for multiple days. I will generally get all the sounds I think I want the first day, then come back to it with fresh ears and find myself removing, adding, or changing little parts of the sounds. I usually end up doing this over 3+ days, and by the end I will have something that sounds just a little more pleasant than the first rendition.